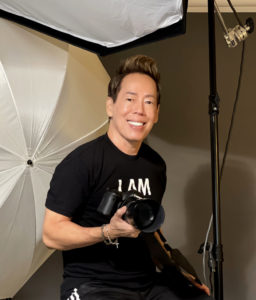 Russell Tanoue has become one of Hawaii’s top photographers and remains in high demand after couple decades behind the lens. He first picked up a camera at the ripe age of 12 and used everything from lamps, tinfoil, fabric to take quick shots of his subjects. Today Tanoue brings out the best in models, actors, recording artists and celebrities in Hawaii and across the United States, capturing a person’s unseen beauty and creating images that can only be described as electrifying. He is also known for creating the “faces” of tomorrow.

His work has taken him from Hawaii to Los Angeles, San Francisco, Las Vegas, and Chicago. On his future destination agenda is Florida and New York. He has been the photographer of choice for MidWeek newspaper’s annual swimsuit issue for the past 14 years.

Tanoue’s talents have also put him in front of the lens on occasion, making him the subject of numerous newspaper and magazine articles as well as news and entertainment programs, including E Entertainment’s Wild On. Russell was also the cover model for Look Hawaii Magazine, April 2010, Hawaii Business News, cover of MidWeek Magazine twice and also featured in the local/national magazine Real Word. Most recently, February 29, 2012, Russell had a walk on appearance on France’s hit reality tv show, Angels Of Reality.

One of his missions is to make a positive difference in the lives of people he encounters. To that end, he created Project Shine in 2001. The program offers free makeovers and photo sessions to people fighting cancer and other diseases, victims of domestic violence and teenagers rehabilitated from drug abuse. Most recently he has done makeover photo shoots for 4 at risk teenagers from Palama Settlement.  His ongoing spreading of positive messages such as “Always choose joy” and “I AM Enough” is important to him especially to our teens today.

Tanoue began his career in the art world as a professional dancer. He traveled throughout the United States and Canada for eight years, and performed on the Hawaiian Moving Company and the national 20th Century Fox’s Dance Fever. Tanoue’s talent for doing make-up and taking pictures of some of the dancers eventually led him to his passion for professional photography.

Today Tanoue has extended his services beyond the fashion and entertainment industry and has created special photo shoot packages for graduating seniors, realtors, professionals, etc.